StonEQ 4K is inspired by two 4K EQ units: The Brown version & the best attributes of the Black version.

Differing from the hundreds of analog EQ emulations in the plugin market, StonEQ 4k has its own personality, color and behavior. It is not, nor does it try to be, a faithful emulation of the original EQ.

Let us demonstrate with an example: When using the “Width” control, you will notice that from 0% to 49% the equalizer is rather surgical — mostly used to “repair” audio as well as to eliminate unwanted resonances or frequencies. In this sense, the band behaves more like the Black unit. However, when employing a width from 50% to 100%, the band will become much more musical.

In addition, StonEQ 4k features its own unique form of saturation, ranging from subtle to aggressive.

Represented by the blue color, this band has a selectable range of frequencies from 1500 Hz to 16000 Hz, with a gain ranging from -15 to +15 dB. It has two operation modes: Bell and High Shelf that can be selected with the “Bell” switch.

StonEQ’s two bands blend some characteristics of the brown unit and others from the black unit. The differences are more noticeable when manipulating the Width control, represented by the bell-shaped icon. Narrower settings (represented by the minus symbol: “-“) more closely resemble the “black” unit. When the bell is set wider (represented by the plus symbol: “+”) its sound is more similar to the “brown” unit.

Represented by orange color, this band has a frequency range from 30 Hz to 450hz with an adjustable gain from -15 dB and +15 dB.

The low band has two modes of operation: Bell and Low Shelf, which can be selected from the “Bell” switch.

High Pass and Low Pass are modeled from the original channel strip. Both filters are designed to eliminate unwanted frequencies and help tracks “sit” in your mix.

Low Pass covers frequencies from 2 Khz to 22 Khz (off).

Saturation is controlled by the Drive control (labeled “DRV”). DRV ranges from very subtle, passing through “warm” levels, all the way to levels approaching overdriven.

When the DRV knob is set to 0% the saturation algorithm is completely disengaged from the plugin (yielding no saturation whatsoever).

Setting the DRV knob between 20% and 40% produces a subtle but colored saturation. At higher levels, ranging between 50% and 70%, saturation leans toward a clipping effect (reminiscent of analog clipping) which trims peaks, producing a natural limiter effect.

When set above 70%, saturation sounds more aggressive, reaching toward overdriven.

StonEQ’s saturation algorithm interacts with equalization (since it is placed after the EQ module). As such, EQ settings affect its subtly or intensity. 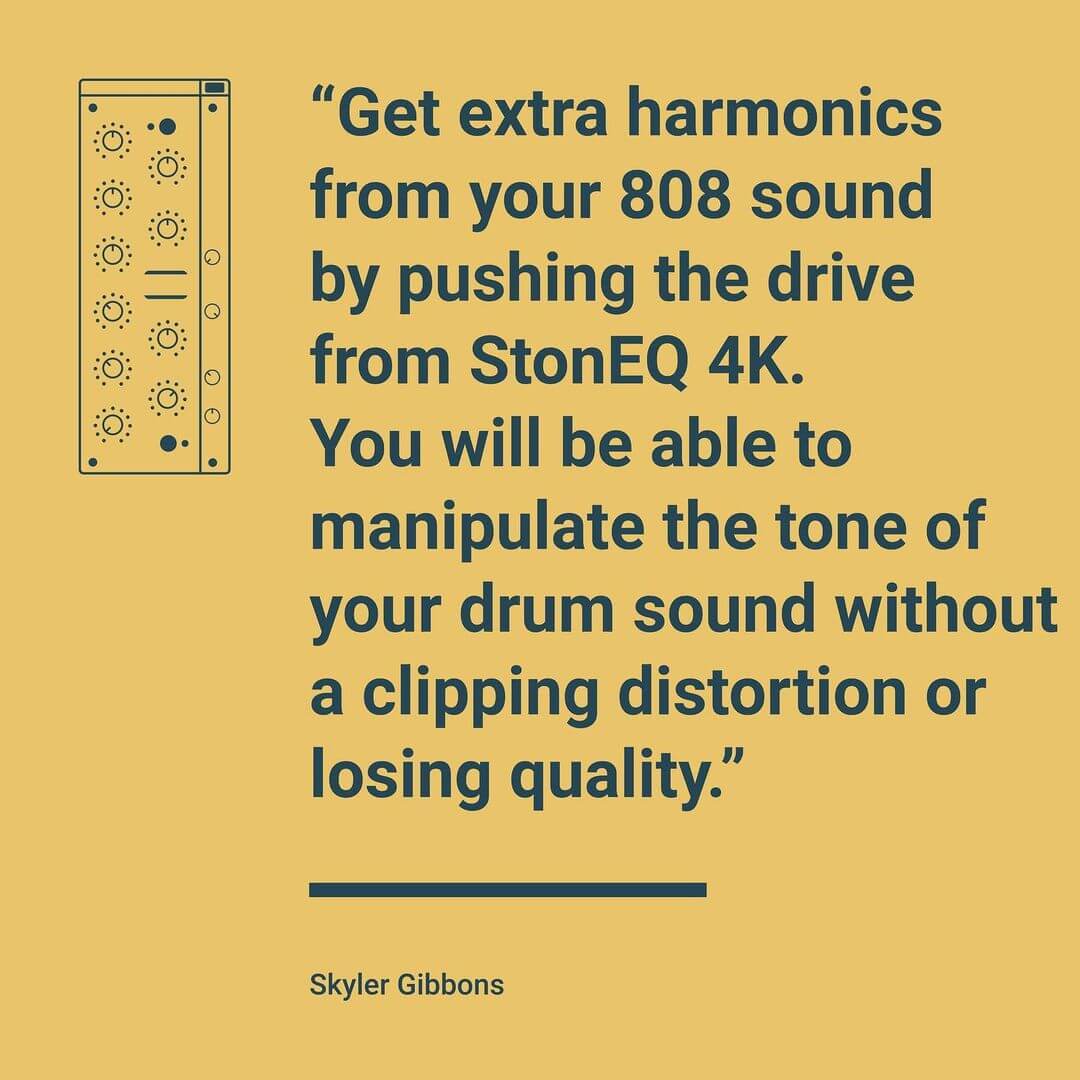 “StoneEQ 4k is a truly efficient EQ. It is straight-forward to use and provides highly musical equalization curves. The included console saturation emulation knob works wonders, either for warming up the signal or for giving an aggressive rock vibe to a track. A great EQ plugin, versatile yet with character.”

Only logged in customers who have purchased this product may leave a review.